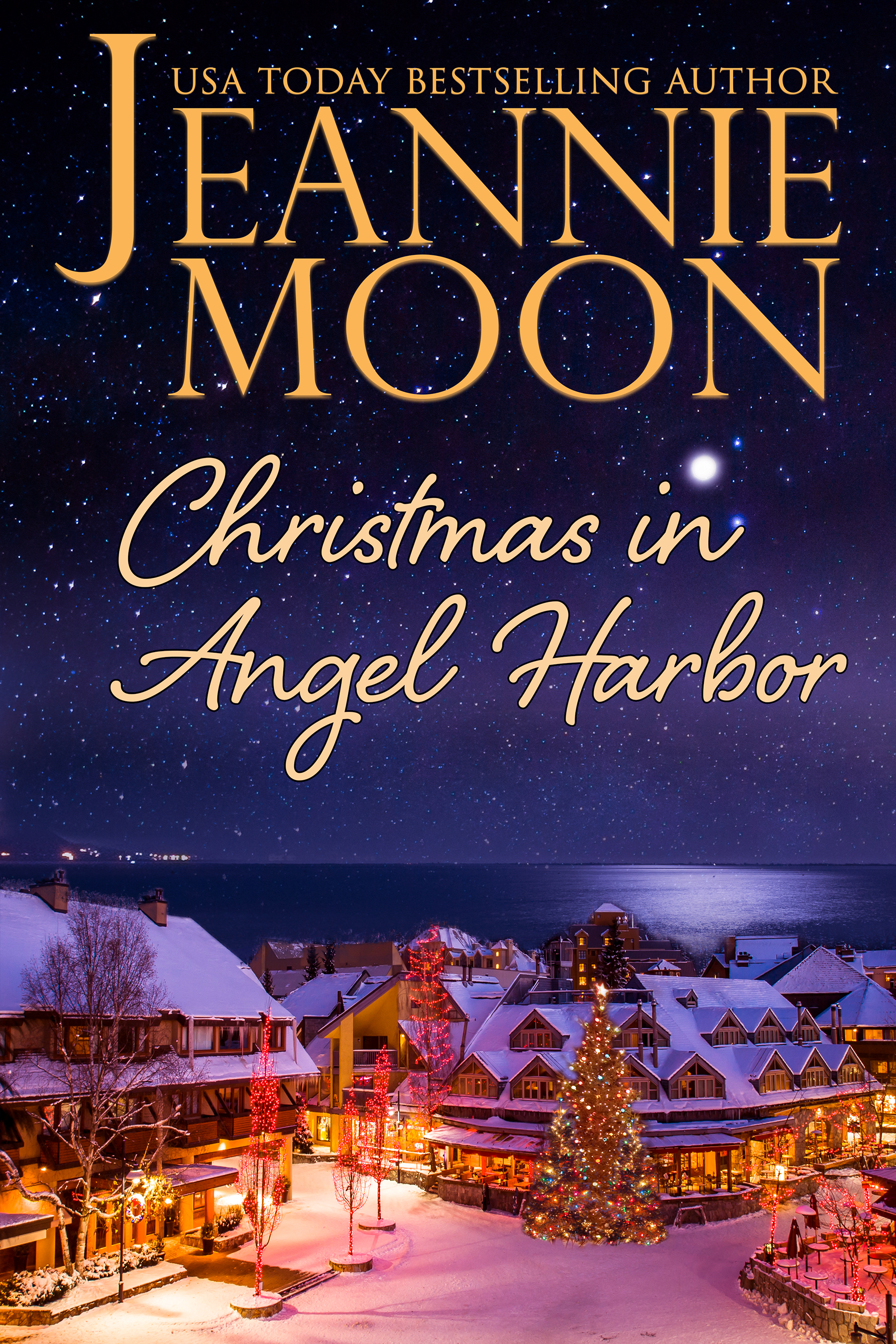 “Christmas in Angel Harbor has everything I love in a book. Great characters, an emotional, compelling story and a heartwarming town. You won’t soon forget your visit to Angel Harbor! Jeannie Moon is a wonderful storyteller who writes with emotion, humor and heart. I can’t wait to read more.”

This Christmas, she’s hoping for a miracle…

Twenty-five years ago, Jane Fallon put her rising career on hold to take over her family’s bookstore after the death of her father. Throughout the years, she’s transformed Angel Harbor Books into a place of comfort for her and her daughter, but when her landlord announces the building has been sold, Jane is faced with sudden uncertainty. If the bookstore is gone, what will she do?

As a young man, Dan Gallo couldn’t get out of Angel Harbor fast enough. Now a best-selling novelist, Dan returns home after a tragedy derails his career. His first stop is his favorite teenage hangout—the local bookstore. It’s almost exactly how he remembers it. But the girl who once worked there is now a beautiful woman whose smarts and spirit inspire him to write again, and open his heart to new possibilities.

With her world threatening to fall apart, Dan hopes that with the help of the town—and some Christmas magic—he can get Jane to see how important she is to the people of Angel Harbor…and him.

November on Long Island was unpredictable. Kind of like a woman.

One minute she was giving you attitude, the next she was warm and charming. The ever-changing weather showed that Mother Nature could be one moody customer. Within a week she could bring rain, sun, gale-force winds, warm temperatures, frost or snow. It was a far cry from the sunshine and warmth he’d left behind in Hawaii, but with each strike of his foot on the pavement, with each mile behind him, Dan Gallo was glad he’d come home.

Avoiding his life hadn’t done anything to help the anger that still swirled inside him, at least not yet. There was a chance he’d start to settle once he established a new routine, but even when that happened, he wasn’t going to tell anyone where he was. He’d left a string of pissed-off people since he’d gone off the grid, but Dan didn’t really care. Angel Harbor, where he’d spent the first twenty-two years of his life before leaving for law school, was the perfect place to hide in plain sight. He was staying at the family house where his sister lived with her husband and kids. She was thrilled that he was going to be around for the holidays and gave him the small guest cottage to use for as long as he wanted.

The main house was a grand lady. An old Victorian with gingerbread trim, it was located just outside of town up a long hill that gave the upper floors spectacular water views. His cottage, while not big, was roomy enough and suited him fine. Compact and recently renovated, it had a bedroom, a living room, and a dining area with a small kitchen. It was the perfect place for Dan to get his head on straight and plan his next move.

Long Island was steeped in stereotypes. Sure, there were McMansions where there used to be open space, and it was too crowded for its own good, but it really did have a lot to offer. With stunning and varied coastlines, history, agriculture, and great downtowns, at its core, the region was really just a bunch of small communities connected by their presence on a long skinny stretch of sand that jutted out into the Atlantic Ocean. Weighing all that, he didn’t know why he hadn’t come home sooner. The big plus? He’d been gone a long time, and no one really recognized him. If someone did, his current situation often made the person uncomfortable enough to leave him alone. Mostly, he could be anonymous here. Something that definitely appealed.

Pulling back his stride to take the hill, he turned onto Main Street and allowed the peacefulness of the view to seep in. Only a small breakfast place and the local deli were open this early, and the smell of bacon and eggs frying on a griddle wafted toward him. He’d already run three miles in the sleepy neighborhoods around his sister’s house, enough to justify an egg sandwich from his favorite deli.

Turning toward the park, he figured he’d do a lap on the paths along the harbor to assuage any guilt that might crop up once he indulged in a breakfast that he’d thought about far too often when he was away from Long Island. Sure, he could get an egg sandwich anywhere, but not like this one. It was the little things about home he’d missed most. He’d learned the hard way that a good life was a collection of small experiences. While big and flashy might impress in the short term, the millions of tiny details about an experience were what mattered.

Maybe it was his age. Once he passed fifty, Dan’s tolerance for nonsense dropped to zero. He liked things simple and uncomplicated. It was one of the reasons he’d sold his apartment in New York, and bought the house in Hawaii. The constant crush of people, the endless busyness, exhausted him. His beach house on Oahu was peaceful and quiet, but the solitude brought him no peace.

His reputation was as an enigma, a mystery man who only showed up when a book or a woman necessitated his presence, and his agent played it up. His latest author photos were black and white art shots that had him shadowed and sinister-looking.

As he ran, he observed his fellow early risers. He nodded to a pair of elderly women who were walking almost as fast as he was running. Their pace was impressive as they power walked in the morning chill, barely sparing him a glance. He could use that little slice of life. The story that was swimming around in his head needed the people and locations Angel Harbor provided. No more murder and mayhem. No more blood. Even if it did sell, Dan was done with it.

The sun decided to break through the low clouds, and from its position, just above the horizon, it cast tendrils of light over the water. Everything shimmered and sparkled in response. He stopped, taking a deep breath as he took it all in.

This place was his next book. He wasn’t sure of the plot. He hadn’t fleshed out the characters, but Angel Harbor was the setting. Turning, he could see clear up Main Street. It was idyllic, almost too perfect, but that’s what he was in the mood for, and no one was going to tell him otherwise. Not this time.

From where he stood, he could see the candy shop, the toy store, and the local tavern—all three were decked out in holiday glitz way too early for his liking, but he had to give them a gold star for effort. In addition, he spied a few restaurants, an art gallery, and a tea shop getting in the Christmas spirit. But it was the bookstore, sitting quietly on the north side of Main Street, that captured his attention. It held so many of his memories. It lived in an old house, a two-story clapboard structure, painted a deep gray, that had converted nicely to retail space decades ago. It still exuded the same friendliness and warmth that had welcomed him when he was first figuring out how to tell a story. He could see the large-paned front windows displaying a variety of books for kids and adults, and the wraparound porch held a quartet of weathered rocking chairs that invited visitors to sit down and stay for a while.

“Keep your eyes open to possibilities.” Isn’t that what Mike Fallon had always told him? The former owner of the bookstore was a fountain of good advice. Whether it was about writing, or school, or girls, Dan had embraced Mike’s philosophy for a very long time. Until he didn’t, and that’s when his life seemed to get away from him. He was so caught up in the life, that Dan forgot to live.

He’d spent hours in the store as a teen, writing in his notebooks, and hiding out from his jock friends to avoid being labeled as a nerd. They wouldn’t understand why he wrote, and he didn’t want to explain it to them. They were good guys, but putting words on a page was a lot different than executing a strategy found in a playbook.

Some of his quirkier habits developed when he was working at the round table tucked in the corner of the history section. Dan still wrote the first three chapters of any book longhand to get in the flow with the characters. He liked to use a cheap, blue ballpoint pen for the task, so a few years ago he bought a gross of the things and never traveled without at least a dozen in his bag. He always remembered how Mike would let him stay after closing to keep working, while the older man was cleaning up from the day. He made Dan promise that when he was famous, he’d come back and have a signing in the store.

He’d never gotten there, and the guilt of it gnawed at him. He was a multinational bestseller, which meant he got his way. Always. He could have pressed his publicist to arrange a signing at Harbor Books, but like so much else in his life, he didn’t take the time to think about anything outside his own self-centered interests. Yeah, there were a lot of regrets rooted in that store. Dan would have to try and vanquish a few of them.

Done with his run, he made his way to the deli, and as soon as he walked in, the smell of bacon, eggs, and strong coffee filled his head. A group of men dressed in jeans, work shirts, and jackets were talking and laughing as they collected their coffees and sandwiches. The way they exchanged pleasantries with the woman behind the counter, Dan could see this was just a regular morning for them, and he found he was a little envious of the closeness and the routine. Each one nodded at him as he walked by, and he recognized Billy Scalino, one of those jocks he went to high school with. Billy’s eye widened in surprise when he saw Dan, and he offered a pleasant greeting.

“Nice to see you, man.” That was all he said, but Billy’s greeting was indicative of the town as a whole. People were nice here. That didn’t mean they wouldn’t tell you where to go if you pissed any one of them off. Dan shouldn’t have been surprised at the friendliness of the greeting, but a lot of years had passed between then and now. These men had better things to do—like making a living and raising their families—than to worry about some guy in the deli.

If he was going to do justice to his new book, a knock off the pedestal the industry had put him on would be useful.

In his head the story was starting to take shape. It wasn’t going to be like anything he’d ever done, and he had plans to start today. Now that his setting was shaping up, the specifics had a place to go.