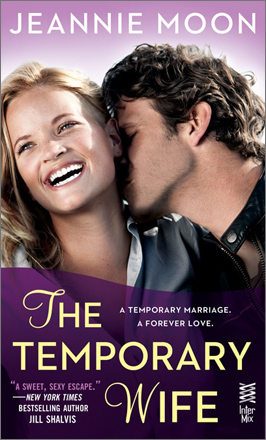 Kindergarten teacher Megan Rossi is devoted to being a mother to her best friend’s five-year-old daughter, Molly. When the child was orphaned, Meg became the little girl’s legally named guardian—over the objections of Molly’s wealthy grandparents, the Campbells. Now the Campbells are petitioning for custody, and Meg is faced with a long and expensive legal battle. The last thing she expects is for her former high school boyfriend—and the Campbells’ estranged son—to offer a solution: marriage.

Billionaire software developer Jason Campbell knows his parents don’t have Molly’s best interests at heart—it’s all about control for them. There is one way he can ensure that his sister’s last wishes are honored. He will offer Meg the protection of his name and lawyers until the custody arrangement has been finalized , then he’ll secure his niece’s future with a very generous divorce settlement. Jason’s considered all the scenarios, except one—that the sparks that once flew between he and Meg might reignite a burning passion. And that his confirmed bachelor heart might just melt away from the heat…

His parents’ latest scheme beat all. They had always played games with people, manipulated them for their own benefit. That was why he followed his own path and rejected his parent’s influence the minute he left home for college.

But this time…this time was different. They weren’t messing with a business associate or a rival at the club, they were playing with a five-year-old’s life and Jason wasn’t going to let them win. Not this time.

He stood in the library of his parents’ home, the warm wood paneling a total contrast to the cold people who were lounging in the leather club chairs nearby. Late afternoon sun streamed in the windows and Jason felt the pain of his sister’s death even more acutely now that he heard what they were planning to do.

“You can’t,” he said to his parents. “It’s wrong. Do you know what this would do to Molly?”  His sister’s wishes had been clear, the will specific, and Jason knew exactly why Grace didn’t want Molly, his five-year-old niece, with her grandparents. It was the same reason he’d separated himself from the formidable and well-connected Will and Alicia Campbell—his parents were about as nurturing as a pair of pit vipers.

Molly was to be raised by Grace’s childhood best friend, Meg Rossi. But no matter what Grace may have wanted, that wasn’t acceptable to his parents, who’d started planning their offensive the minute the will was read. Jason knew he had to stop them.

“It’s already in the works,” said his mother. With her sleek blonde bob and her perfect make-up, she sucked the olive that had been soaking in her third martini right off the toothpick. She looked anything but maternal. “I almost feel bad. She can’t afford a lawyer, so she can’t exactly put up a fight.”

“Who needs a fight?”  His father blew out a stream of cigar smoke. “Nice, neat, done. Molly belongs with us. The girl means nothing. All she wants is the trust fund anyway. Hell, she’s tried to get at our money before by going through you.”

“She wasn’t after money. Jesus, Dad.”  Jason was so sick of that story. Meg was like a sister to Grace. And to him, well, memories of her came rushing back when he least expected them. Memories of how much she meant to him—of what they meant to each other. What he did know was that she was no fortune hunter, and his father could say whatever he wanted, but it would always be a load of bullshit. He wished he’d had the nerve to say that fifteen years ago. Shaking off the regrets of the past, Jason tried to focus. He had to get back to the issue at hand—his niece and his sister’s wishes

“Look, Grace knew how she wanted Molly raised. Living here wasn’t part of it.”  Jason remembered the long talk he, his sister and her husband had when Molly was born. They wanted their child to have a normal upbringing, away from the iron gates and servants of the estate. This life had been so toxic, that Jason and Grace, both of whom had trust funds that could rival the GNP of a small country, had decided to make their own way in the world. Even his brother Josh, who was still speaking to his parents, worked like a dog to get ahead rather than rely on his inheritance.

His parents didn’t care though, and they were going to snatch Molly back into this hell hole and destroy anyone who got in their way. That included his late sister’s best friend, Meg, who had been making every effort to involve the Campbells in their grandchild’s life since Grace’s death.

Molly didn’t really know his parents all that well because his sister had limited their contact to holidays and birthdays. Meg had given the Campbells more access to their grandchild than they’d ever had, and her reward was going to be a court fight that could bankrupt her.

“Darling,” his mother sniffed. “I don’t know what your sister was thinking. We are Molly’s family. Megan shouldn’t have ever been brought into this. Honestly, you’d think she’d be thankful. She’s not married and she’s a teacher, for God’s sake. They live in a tiny little house. The child goes to public school. This is not acceptable for a Campbell.”

There had to be a way to stop his niece from becoming a pawn in his parents’ game, but he didn’t see how.

“So using your reasoning,” he began, “if Meg were married and lived in a McMansion she’d be acceptable?”

“Well, no. We’d still want Molly with us, but I’m sure the courts would view it as a more stable environment than what’s in place now. God knows how many men are there in a given week.”

A spasm tightened his jaw. Just the way his mother talked about Meg made him want to hit something. Megan may have been single, but he was fairly sure she didn’t have a parade of guys in and out of her place. He remembered the girl she used to be, his first love, with her bright smile and eyes that sparkled when she looked at him.

That carefree teen was long gone. He hadn’t talked to her in years, but the last time their paths crossed, Jason had noticed that Meg had become more aloof, more cynical. Of course, that could have been the effect he had on her, but he did know she worked hard, made her own way in the world and obviously Grace entrusted her with the most precious thing in her life. Meg didn’t deserve to have her name dragged through the mud.

His parents’ tactics didn’t surprise him, though. They always made the Rossi kids feel like second class citizens. But Jason envied Meg’s family. While her dad managed the Campbell estate, her mother taught school. Meg and her brother and sister seemed to have everything—stability, love and the chance to be themselves.

It was the exact opposite with him and his siblings. There was no nurturing support in his family—unless it came from a string of nannies. His parents had done such a thorough job establishing their power base in the community, there were few people who were willing to risk getting in their cross hairs. As a result, there weren’t many close friendships, because too much could have gone wrong. There was a lot of feigned cordiality and polite indifference, but, to put it bluntly, people were scared shitless to make a wrong move around any member of his family. His father had ruined more than a few fortunes and his mother was the queen of her social circle, moving other women around like pieces on a chess board. His parents were made for each other. They were supremely confident and felt fully entitled to do whatever they wanted to whomever they wanted.

“Jay,” his father crossed his legs. “You and your sister turned your backs on the family, on your legacy, and your brother may be part of the firm, but I don’t know that he’s ever going to settle down long enough to produce an heir. Molly gives us the chance to pass on what it means to be a Campbell. Don’t get in the way of this. You’ll regret it if you do.”

It took a bit, but when his father’s words registered he felt his blood start to pressurize. “Are you threatening me?”

Puffing on his cigar, his father’s mouth turned up at the corners. “I don’t think I’d call it a threat. Consider it a friendly warning.”

There was a protracted silence and Jason was sure his father, always so fucking cock sure of everything, felt that familiar thrill of victory.

Not this time. “Well, thanks for the warning, Dad, but I’m good.”

“I guess, but let me explain things to you, boy. You tech guys may be cutting edge and all, but I could buy that company of yours and still have enough money left over to do it again.”

That was the long and short of it, right there. It was all about buying and selling. Money. Power. The fact was, Will Campbell probably could have bought his son’s company, but he wouldn’t know what to do with it. Jason had two Ph.D.’s from MIT in computer systems and security. His firm designed software and operating systems that kept hackers from breeching banks and investment firms. Firms like his father’s. So while Will could buy Jason’s company and not think twice about the cost, Jason could take down the server at his father’s firm with one well-placed virus. He wouldn’t know what hit him.

He had to do the same with protecting Molly. There had to be a strategy, something he was missing. Something that could protect his niece and give Meg Rossi the support she needed to fight his parents.

And then it hit him. Something so simple he almost laughed. Something his parents would never see coming. The only problem would be Meg. Somehow he had to get her to trust him and he didn’t know if she would. Ever. He’d broken her heart into a million pieces when she was only sixteen, and getting her to put her faith in him wasn’t going to be easy.

Reviews for The Temporary Wife

“The Temporary Wife is a wonderful breath of pure romance and second chances.”