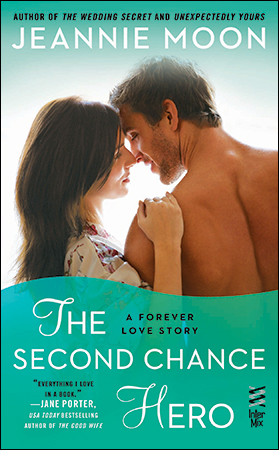 Even the most broken heart can find love again…

Navy combat nurse Kim Torres knew it was a possibility. But she never thought it would happen. She never thought she would cut through a critically wounded Marine’s fatigues only to find her fiancé, Tom Albanese. She never thought he would die in her arms. Or that she’d collapse against his commanding officer when grief overtook her.

Fast forward one year, and Major Owen Kent has returned from Afghanistan to take his position as the billionaire CIO of Reliance Software. He’s happy to be home, and everything is business as usual–until he sees Kim Torres, the nurse he saw unravel in the Afghanistan hospital, the woman he could never quite get off his mind.

Now Kim is Harper Poole’s nanny, a job she took to get her mind off of her heartbreak, and although she doesn’t recognize Owen at Harper’s Memorial Day barbeque, she feels an instant attraction. Kim hasn’t felt this spark in so long, and Owen is the exact opposite of Tom, who wounded Kim’s heart in more ways than one. But can Kim find it within herself to love–and trust–again?

Sometimes it was the quiet that got to her. Kim knew that if people were screaming, at least they were still alive. But now, there was nothing. Nothing except the hum of the equipment, the glare of the harsh lighting and the beating of her own heart.

Looking down at her gloved hands, her breath caught; her throat tightened. So much blood.

She snapped the latex off her hands and threw it in with the other biohazards, then pressed her back against the wall. As she slid down, her arms folded over her middle. Holding in her heart, maybe? Her bleeding, breaking heart.

Usually, the team knew at least fifteen minutes before the inbound dustoff landed with wounded—especially when it was coming from that far out. Today, they didn’t have near that. They had five. Five minutes to prepare for men who were so gravely injured they shouldn’t have survived the flight.

The gurneys came crashing through the doors and they all had their jobs in the ER. Kim was ready for her patient—an alpha—the designation given to the patients with the most life threatening injuries. They knew he had a massive belly wound and burns on his neck and face. As bombs went, this one was a widowmaker.

Kim remembered descending on the patient with scissors, cutting off the bandages applied in the field so they could get to the bleeding in his abdomen. If they could get that under control he had a chance. A slim one, but a chance. She hadn’t gotten far when the big man took a gasping breath and she heard the impossible.

“Baby, look at me.”  It was barely a whisper, but the words were screaming in her head. Her eyes traveled away from the blood, hesitating for a moment over his chest where his name was displayed. Albanese. God. How had she missed it?  Again she took in every inch of him and when she got to his face, and looked in his dark eyes, she saw the pain, the fear, he was facing. And Kim knew they would be saying goodbye. Even as the doctors worked on him, she knew.

He was dying. And there was nothing anyone could do.

It seemed unimaginable. She and Tom were part of each other. Together since they were just kids, he went into the Marines after high school, she went into the Navy after nursing school. He gave her a ring.

The wedding was in six months.

His fingers found hers and he gripped them with desperation. He squeezed hard. Kim reached out and wiped away the tear tracking down his face. His breathing was more labored, shallower. And he was scared. So scared. She leaned in and kissed his temple.

But there was no response. The end rushed up. She could see he was losing his fight, his body convulsed, his eyes rolled back--then he flatlined.

The tone from the cardiac monitor numbed her brain, told her a truth she wasn’t ready to hear. Tom was gone.

There were no measures taken. No dramatic chest pounding. No paddles. The doctor called his time of death.

That’s when Kim turned and walked into the corridor. That’s where she was now and where she would likely stay, running over the last few minutes again and again.

Major Owen Kent eased his way out of the passenger seat of the MRAP, blasted by the oven-like temperatures that had baked the provinces for the past week. They’d been driving for an hour and a half and even with the windows closed and the air conditioning cranking, he still felt like he’d eaten a bag of dirt. As he turned toward the building, he saw his driver, Corporal Lynn, take off into the hospital at a dead run, almost forgetting to turn off the engine. Everyone knew about the rules regarding fraternization between the troops, but war being war, and humans being humans, sometimes the regulations were ignored. Owen wondered what she was going to find inside. The Marine she’d been involved with probably wasn’t going to survive his injuries.

Carlson, the corpsman who’d traveled with them, checked the wound on Owen’s left hand. It hurt like a bitch, but it wasn’t serious, a single gash that might need a couple of stitches. “I just want to make sure this is completely cleaned out, sir.”

“I understand.” Owen glanced toward the door. They could have irrigated and dressed his wound back at their base, but like the corpsman Owen wanted to know what had happened to the two men who had been airlifted. "What do you think?”

It was a vague question, he knew that. But he was too superstitious to ask anything more specific. And it was likely the corpsman wouldn’t answer.

Carlson shook his head. “I don’t know. We did our best.”

Owen’s stomach lurched. He’d only been back in country for two weeks. It was his third tour and it was going to be a long one. Now for the duration, he’d think about the twisted, smoking metal. The bodies. The smell. The men were under his command and that made him responsible. They were checking out possible insurgent activity in a small village and had made a quick detour to drop off some toys for kids they knew didn’t have anything. They were just trying to do a nice thing and now, more than likely, they were both dead.

He thought about the families...the parents and grandparents and siblings. All the people who would miss them. Neither one was married, but they’d both left people behind.

A picture of his mom popped in his head. It had been too long since he’d called her.

The hospital on the airbase provided the best care in the field to both soldiers and locals, but all Owen could think about was that it smelled like death. Holding the compress on his hand he saw people milling around at the end of the hall. He recognized Lynn, and as he closed in he saw there were three people in scrubs...two were talking to the MP, consoling her, and a tiny dark haired woman was standing against the wall, her back stiff, her lips pressed tightly together, her knuckles white. Something was up. Finally she looked at him and that’s when he saw it. Something in the grey-green depths of her eyes revealed her pain.

She reached behind her and took a pair of rubber gloves from a dispenser on the wall, donned them and moved in his direction. She stopped in front of him and reached out cradling his hand gently in hers. Torres. USNR. RN. “You’re hurt,” she said.

Her lip quivered and she nodded, carefully pulling away the bandage. Blood oozed from the wound, but the bleeding had definitely slowed down. “You’re going to need some stitches. I can...”

“Lieutenant Torres, why don’t you take a break?”  A tall man, an Air Force doctor according to the information embroidered on his uniform, stepped forward and laid a compassionate hand on her shoulder. He knew what was wrong, what was eating at her.

He cut her off, looked at Owen. “Major, if you want to step into the treatment room, I can stitch you up and get you and your people on your way.”  He nodded toward the corpsman and Lynn and then turned back to the nurse. “Kim, it’s okay, I’ll handle this. Go take care of yourself.”

“I’m FINE.”  The pretty young woman was still holding onto his hand, but now Owen could feel her trembling. “I don’t want to take care of myself. I want to take care of my patient.” Her words were controlled, but strained. He’d seen this before. This was a person who was reaching the breaking point. “I…need…” She drew a shaky breath. “I n-need to do…m-my…j-job.”

No one said anything. No one moved, until finally the woman’s knees buckled and she crumbled right in front of him. Owen’s arm shot out and grabbed her around the waist, pressing her back into his chest as she started to go down. Unable to stop the momentum, he went with her to the floor.

Holding onto his good arm with both of hers, she clung with everything she had, her body shaking and her breathing coming in gasps. Her tears weren’t dramatic, but soft, personal. Owen had no idea what had caused her to lose it like this, but listening to her broke his heart.

“Shhh,” he whispered. “I’ve got you. Shhh.” Her head was against his bicep and something inside him stirred. Something primal, protective. While he was there, no one would hurt Lieutenant Torres. No one.

He was still holding tight, trying to console her when another nurse crouched before them. “Sir, let me take her somewhere private. She needs to be away from here.”

He nodded, because that was the right thing to do, and started to release her, but the lieutenant held on. “Go with your friend,” he said, taking in the light flowery scent of her hair. “She’ll take care of you.”

Looking up at him, awareness flooded her eyes and pink stained her cheeks. Damn, she was beautiful. She was also embarrassed and he wished she wasn’t.

“Oh, God. I apologize, sir.”  She rose and he did as well, each taking a step away from the other. “That was inappropriate. Excuse me.”

“Don’t apologize, please.” He didn’t know exactly what had happened, but he couldn’t help feeling responsible and the last thing he wanted was her apology. “I hope…” I hope I see you again. “I hope everything is okay.”

She nodded and went with her friend, looking back once and offering him a weak smile. He turned to the doctor in charge once she was out of eyeshot, grateful to focus on something else, even the fate of his two Marines. “Albanese and Scott?”

“Dead within minutes of arriving.”

Owen looked toward the door through which Nurse Torres had gone. “Will she be okay?”

Shrugging the doctor let out a long breath and pulled Owen aside. “Staff Sergeant Albanese was her fiancé.” He tilted his head toward Lynn. “It went from bad to worse when his girlfriend made an appearance. Obviously, the lieutenant didn’t know about her.”

“Oh, shit.”  It was time for him to get Corporal Lynn out of there in case Lieutenant Torres came back. “We’ll get out of your way--”

“Not so fast. You aren’t making the drive back to camp with your hand like that. Come back here, I’ll stitch you up and get you out of here.”

Glancing down, he remembered his hand. Great. The stitches were going to hurt like hell, but then he thought about today’s casualties, and nothing compared. Nothing.