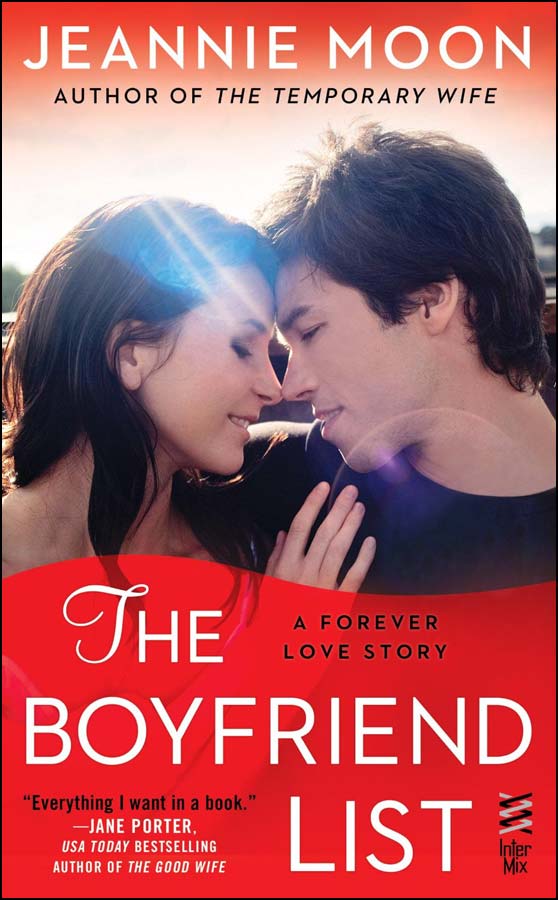 Jenna Albanese planned it all out at thirteen when she listed the qualities she wanted in her perfect man. Years later, she thought she’d found him. When all she got was a broken heart, Jenna tucked away the boyfriend list—and her belief in happy ever after.

Nate Bayard has a life most people only dream of—he’s a handsome high-caliber polo player and partner in a multibillion dollar business. But as intelligent and confident as he is on the field and in the boardroom, he’s hopeless with women—until he meets the sweet and funny Jenna. She’s just about perfect, and Nate’s determined to make her his. There’s just one little problem. Jenna’s unwelcome past is about to make a comeback.

For Jenna, overcoming her mistrust in men—particularly rich ones—isn’t going to be easy. Then she comes across that old boyfriend list and realizes that maybe it’s time for another look and a few changes to bring a brand new beat to her romantic heart.

Nate Bayard stood at the end of the flower-strewn aisle as the woman he’d been falling for since the day he met her walked toward him. She looked perfect. A vision in soft silk and chiffon, her dark hair curled over her shoulders and her eyes twinkled with mischief.

And it was the mischief that he loved most of all.

He admitted to himself right then and there, he was a total goner. He’d be hers forever.

Unfortunately, he wasn’t the groom at this wedding, and Jenna Albanese wasn’t the bride. So unless Nate got up the nerve to do something, to ask her out—hell, even utter more than two sentences to her without sounding like a complete ass—it was destined to stay that way.

Nate nodded once, not wanting to look too obvious. Of course he hadn’t taken his eyes off of her, so being subtle wasn’t in the cards today, especially when Jenna made eye contact with him and smiled. God, did she know what that smile did to him?

He looked away, quickly. Perfect, that would send a great message.

This had never happened to him before. Yeah, he dated, sometimes steadily, sometimes a lot, but no woman ever twisted his heart into a pretzel like Jenna.

Best as he could tell, she had no idea he had feelings for her. Most of the time he didn’t even think he was on her radar.

“Take advantage that you’re her partner today, man.” Jason was leaning toward him, still church whispering.

“Dance with her, talk to her.”

“Would you two shut up? I’m getting married here and you ladies are plotting like a couple of twelve-year-olds.” Nothing like a nervous groom to put things in perspective. Owen Kent was one of his oldest friends, and never minced words.

Owen continued to snarl until the organist in the choir loft hit the first chord of “The Wedding March” and every head turned toward the back of the church. Surveying the scene, it was very much like other weddings he’d attended. The ceremony was held in the chapel of a large parish in Oyster Bay. The old stone church was full of charm and history, with its carved oak pews, beamed ceiling, and inlaid wood. Tiffany stained-glass windows, the most striking feature of the chapel, filled the church with color and light.

Nate couldn’t get a glimpse of the bride with everyone standing, but he could see the reaction on Owen’s face. The love his friend had for Kim Torres was something of legend, but Nate wasn’t surprised. Of the three of them, Owen was the one who was larger than life. A marine officer, and a bona fide hero, it was no wonder his friend loved with no bounds.

Nate believed he and Jenna could have a shot at something like that. If he could figure her out.

“You won’t,” Jason said, patting his arm. “If I haven’t messed up with Meg, you won’t mess up with Kim.”

That was the moment Nate envied his two best friends. They had it all. He, on the other hand, glanced at Jenna and thought about what he was going to do so he could stop wondering, What if?

Jenna couldn’t get over how beautiful Kim looked. From the minute she stepped into her gown, a frothy concoction of tulle, lace, and crystals, her friend radiated the special beauty that only brides possess. Jenna had snapped a few photos without anyone seeing and she just knew they would be the best ones of the day. The simple excitement and the love she saw on her oldest friend’s face was undeniable. Glancing at her camera, Jenna wondered if she should revive her photography business—maybe do it part time—focusing on weddings, babies, and family portraits. Happy moments.

Moments like the one Kim and Owen were having right now.

Jenna wanted to love someone the way her friends loved each other, but when she’d given her heart in the past, she’d ended up broken and betrayed. Her judgment where men were concerned was not the best. In fact, it downright sucked. So rather than risk her heart, or her friends and her family again, Jenna decided it was best to stay out of the game.

But she was glad Kim didn’t give up. Just seeing Owen’s face as Kim walked down the aisle was proof true love existed, and her friend deserved a man who looked at her like that. Someone who would love her. Owen certainly seemed to fit the bill.

As she was about to redirect her gaze up the aisle, Jenna was drawn in by a pair of soft, sweet hazel eyes. Nate Bayard. The gorgeous, geeky CFO of Reliance Software. He was one of Owen’s best friends and so very out of her league. Which really didn’t matter because she got the sense he didn’t like her much. She’d caught him staring at her often enough in the last couple of days, more than he had in the past six months, but she never got the feeling his attention was flattering.

Like his two partners, Nate was tall, just a hair over six feet, she guessed, but unlike Jason’s polished elegance or Owen’s dark, brooding smolder, Nate was more boy-next-door. He was handsome, no doubt. With his wide-set hazel eyes, angular bone structure, strong chin, and light golden-brown hair, Nate was very nice to look at. And the body—whoa—the way the man filled out a suit should be deemed criminal.

But that was all she had. Jenna had no idea what the guy was all about, other than he was rich as hell, adorable, and even though he never gave her the impression he was interested—in fact, he acted very much like he was not—a warm feeling spread through her every time she looked at him.

Gah. This little crush had to stop. It was bad enough she was paired up with him today. The rehearsal dinner had been a nightmare. She’d tried to get him to talk a little at church, and he shushed her. Shushed her. Like she was some little kid. Then he sat all the way on the other side of the room when they went to dinner. He’d made no attempt to get to know her at all. The other groomsmen and bridesmaids were laughing and joking around, having a good time. Not her and Nate. No. He was busy chatting up Owen’s family. There was no planning their silly entry dance into the reception. Nothing.

But still, he was so damn attractive. And Jenna hadn’t felt that little tingle in a long time. The kind of tingle that told her she’d been out of circulation too long.

Lord, she had to get out of her own head. Nate Bayard didn’t deserve the energy she was expending thinking about him. The only person she should be focusing on was Kim. Her beautiful, wonderful friend, who had been to hell and back, deserved this magical day, and if that meant putting on her best face and spending time with Nate, so be it.

Harper Poole, Kim’s former boss and one of the executives at Reliance stood next to her and leaned in just as Kim and her father reached the end of the aisle and he lifted her veil.

“God,” Harper said. “She’s a perfect bride. Look how happy she is.”

Jenna sniffed and dabbed at tears that were threatening to ruin her makeup. “She is.”

“Maybe you’ll be next,” Harper whispered.

Jenna shook her head. As happy as she was for Kim and Owen, she felt a little pang of jealousy when the big handsome marine took her friend’s hand and led her toward the priest.

She wanted this. She wanted to find someone who would love her back with total abandon. Who would make her the priority in his life. Who wouldn’t lie. Or cheat. Not like that dirty lowlife who had left her to clean up his mess in San Francisco.

Back then, Jenna thought she had it all—the job, the boyfriend, the apartment. She believed she’d outgrown the trite suburban existence she’d known her whole life. That family didn’t really matter. But looking out into the congregation gathered to celebrate Kim and Owen, her parents included, she realized that family was everything.

Back when she was in trouble, it was her family who was there for her. They were the ones who picked up the pieces. No, Jenna would never question how much she needed them ever again.

But she would question her judgment regarding men for the rest of her life.

Her track record sucked and there was no reason to think it would improve.

Jenna may have wanted the fairy tale, but unless there was a fairy godmother someplace, happily ever after was not going to happen.