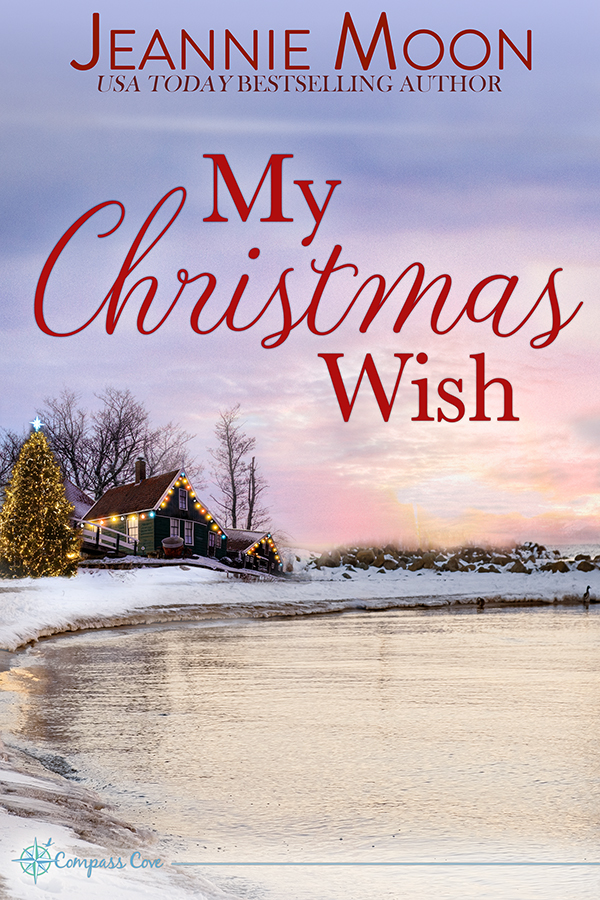 With her well-connected Long Island family, an exciting job as a London art dealer, and a brilliant, attentive boyfriend, Natalie Miller’s life was golden. Until it wasn’t. No one knows about the anxiety that drives her, the loyalty forcing her to make impossible choices, or the secrets consuming her. Now back in Compass Cove, Natalie is fielding questions from her family about what brought her home and longs for the life—and the love—she left behind.

University professor and aristocrat James Phillips prides himself on understanding people, so it mystifies him when the love of his life leaves London—and him—without explanation. When an opportunity to work at a small college in Natalie’s backyard arises, James jumps at the chance to move across the pond, willing to do whatever it takes to win back the heart of the woman he loves.

Can the magic of Compass Cove at the most wonderful time of the year help James and Natalie find their way back to each other?

Natalie Miller was addicted to the sunrise. No matter what the previous day had been like, no matter how horrible or confusing, the sunrise represented a fresh start. So, as long as the weather allowed, Natalie came out to the beach at her family’s estate, spread out her yoga mat, and let the sun dictate her mood. Her yoga practice centered her even when it felt like her life was crashing down around her.

Today felt different, like there was some kind of change coming. For the life of her she couldn’t put her finger on it. Her family didn’t understand her intuition, her ‘woo woo’, as her brother Jack had named it, but they’d stop doubting it. It was a Natalie thing: different, odd…crazy.

Normally, she settled herself facing north — true north—for the clarity the symbolic direction represented. However, this morning she made an adjustment facing north-east…toward the ocean.

Toward the regrets she’d left behind.

The new light bathed her, its rosy tendrils circling around her like the morning mist that was so common in London. She missed her adopted city, missed the energy, the beauty, the vibe of the people. She missed her quirky gallery, her apartment, and her favorite coffee shop.

And she still missed James.

It had been over two months since she’d come home. Summer had slipped into fall, the days grew shorter, and Natalie tried to feel grateful for the little things she had back now that she was on her own turf again. The beach was one such gift, and breakfast at Rinaldi’s was a delight not replicated anywhere in the world.

She was also grateful for the people. Beyond her family she had Jordan and Lilly, her very best friends from childhood, as well as her new friend Maddy. While part of her viewed being back in Compass Cove as a comment on her choices, she couldn’t help but feel wrapped in the warmth of the place.

Her heart didn’t hurt as much. The pain was fading. She had adjusted to not being in London, and was starting to believe she could put her life back together. Most of the time, anyway. Sometimes she still felt lost.

That aside, she was happy to have had the time to help Adam and Mia get ready for their wedding. She’d loved spending more time with her grandmother, and since her brother and her nieces had moved in at her mom’s while Doug weathered a nasty divorce, she had endless fun being the crazy auntie. Her family was the perfect distraction. Even though she was at loose ends, no one sensed how lost and isolated she’d been feeling. If living in England had taught her one thing, it was how to master the cool exterior.